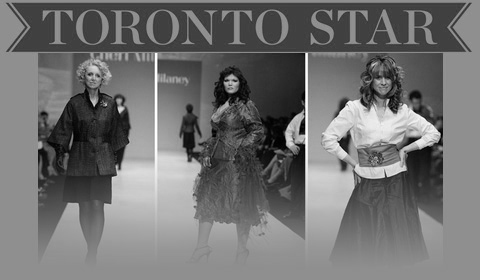 Cheri Milaney unveiled Piacere: Making Time for Pleasure, her spring 2010 collection, at LG Fashion Week Beauty by L’Oreal Paris. The Vancouver designer is excited to announce collaboration from celebrated Canadian women role models, of diverse ethnicity, age and size to help her present, live, the translation from what we see on real models on the fashion runway to how multi-faceted women, with hectic timetables, interpret the trends to update their personal style for the street. The following role models have confirmed participation: Erica Ehm, former Much Music VJ and founder of the Yummy Mummy Club; Cobi Ladner, former editor of House & Home and founder of cobi, collection of beautiful ideas; Amy Sky, singer, songwriter and producer; Kirstine Stewart, general manager, CBC Television; and Tonya Lee Williams, actress, entrepreneur and founder of Reel World Film Festival. As part of commitment to partner with Look Good Feel Better, Cheri Milaney is making a donation to this important program, on behalf of the role models.

Following her debut at LG Fashion Week Beauty by L’Oreal Paris last March when much of the focus had been on the real women non-professional models, in Piacere, Cheri Milaney will present her design vision more clearly, while remaining committed to her mandate: “I am a designer who dresses women of diverse age, size, shape and ethnicity. I offer women support in addressing their body type and style preferences, so that they look and feel their best.” For spring 2010, she aims to showcase Piacere on real models as a backdrop to a handful of outstanding Canadian women role models, who will be wearing pieces from the collection that celebrate their style and personality. “The message behind Piacere is all about the pleasure we get when we let our clothes project our individual style and we honor ourselves,” says the designer.

Inspired by the idea of contrast as in a “garden in the city,” a metaphor for Horace’s Carpe Diem, where a woman seizes moments to celebrate what’s important in her daily life, the designer envisioned the concrete urban life against a soothing natural environment, and the translation from runway fashion to individual style. “Piacere represents the contrast between the softness or tranquility a woman seeks in the midst of her structured, busy and often challenging everyday life. Everything about the collection speaks of pleasure: from my development of ideas during my traveling in Italy, while creating exclusive fabrics, and coming home to bring the collection to life, so that other women could take pleasure in wearing it.”

Erica Ehm is one of Canada’s most recognized personalities. Chosen to be the first female MuchMusic host, she became the voice of her generation. Since then, Erica has remained in the spotlight as her multi-faceted media career has blossomed in television, radio, film, theater, journalism, songwriting, and music publishing. She has gone from rock’n roll to rocking the cradle. She is the creator/publisher of YummyMummyClub.ca which speaks to the woman in every mom struggling with the reality of being a modern parent. With a distinctly sexy, playful and cheeky tone, Yummy Mummy club.ca is all about empowering mothers who long to be spoken to as someone who is more than “just somebody’s mom”. Erica travels coast to coast appearing at events and conferences as a keynote speaker, MC and host. Whether it’s giving a keynote address, MCeeing a fundraiser, or moderating a panel, when Erica’s on stage, she brings energy and intelligence. Her son Joshua, little sister Jessie and husband Terry are the reason Erica is a Yummy Mummy.

Cobi Ladner is one of the country’s leading design and decorating authorities and former editor of Canadian House & Home magazine. Her opinions and insight are often seen and heard on national radio and television programs and in the pages of newspapers, magazines and a number of best selling design books. After an enormously successful tenure at H&H, Cobi is now developing her own brand concept in the home and lifestyle arena. Her connection with readers and consumers is unmatched in the marketplace and she is thrilled about re-engaging her loyal fans with a new vision of her own called none other than, cobi, collection of beautiful ideas. Visit www.cobistyle.com.

Amy Sky is a singer, songwriter and producer. Within a short period of time, she has garnered three Juno nominations; two for Best Songwriter, both for her own works and for compositions recorded by other artists. Constantly in demand as a songwriter, Amy’s songs have been recorded by artists Reba McEntire, Diana Ross, Olivia Newton-John, Sheena Easton and Heart to name a few. Anne Murray and Natalie MacMaster scored chart singles with Amy’s songs in 1999 – Anne as a duet with her daughter Dawn Langstroth (“Let There Be Love”) and Natalie with a MacMaster/Sampson/Sky collaboration called, “In My Hands. In 2001 Amy appeared on an extended run in The Vagina Monologues. She also played the lead role of “Mrs. Johnstone” in the play Blood Brothers alongside renowned tenor, Michael Burgess, and pop icon, David Cassidy. Amy Sky was awarded the Canadian Recording Industry Association Applause Award, in recognition of her “passionate and unwavering support of artist’s rights.

Kirstine Stewart is the General Manager for CBC Television, responsible for all programming from sports to comedy and drama and documentaries. Under her command CBC has seen the highest level of viewership in the past 20 years, bringing to Canadian audiences such hits as ‘Little Mosque on the Prairie’ ‘Heartland’ ‘Rick Mercer Report’ ‘Dragons Den’ and the latest headline-grabber ‘Battle of the Blades’. Kirstine was named a Young Global Leader advising the World Economic Forum and has been a past Top 40 Under 40 recipient.

Tonya Lee Williams is best known for her work as Dr. Olivia Winters on The Young and The Restless. With many awards including, two NAACP Image Awards, an ACTRA Award of Excellence, a Harry Jerome Award, an African Canadian Achievement Award, and has received two Emmy nominations. Tonya has proven herself on the screens and behind the scenes. She is also the Founder and Executive Director of ReelWorld Film Festival now celebrating its 10th Anniversary. Over five days the festival screens films from the Aboriginal, Asian, Black, Latino, Middle Eastern, South Asian and other multi-racial communities. For the past two years Tonya has sat on The Toronto Film Board in an effort to create more work and access for indigenous filmmakers. Tonya has just wrapped on the Lifetime movie Double Wedding and is presently recurring on the CBC hit drama The Border.