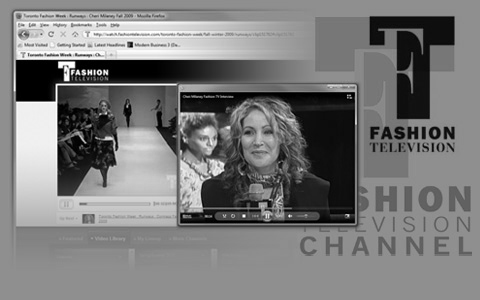 In Cheri Milaney’s list of 10 fashion commandments, Love Thy Muffintop ranks right up there.

The Vancouver fashion designer, who caters to curves, is on a mission to help women celebrate their bodies, bulging midriff and all.

At Toronto Fashion Week, she was the only designer to show samples in size 14, which is actually the average fit for Canadian women despite the prevalence of runway models at Nathan Phillips Square whose bony thighs and flesh-starved arms elicited gasps from the front row.

“I’m hoping we’re going to change people’s perceptions,” Milaney says. “I’m hoping the industry will start taking notice and have some realistic expectations of what beauty should be.”

She’s staked her livelihood on it.

“Our life is on the line with this,” Milaney says.

Two years ago, her husband, Murray Thorn, left his corporate job at Dell, to help develop her dream of dressing women sizes 2 to 16.

When Milaney took to the catwalk for a final bow, her husband and father were in the front row, in tears.

“There was a lot of emotion that has been going into this whole thing,” she says.

Growing up, Milaney, 39, says she struggled with self-esteem and body issues like the rest of her friends. She had to condition herself to be less critical of her physical features.

“It got to the point where I thought, `This is who I am. This is my body. I’ve got to start celebrating what I have and going with that,'” she says. “Life is not about what size you are. It’s about what you contribute and the type of person you are.”

Though Milaney’s made-in- Vancouver collection falls short of the “plus” range, which starts at size 18, she is filling a major gap in the market since many regular retailers don’t carry anything above a size 12.

“It is very costly to produce that wide range, but I think there’s no other way around it,” Milaney says.

And she’s prepared to go broke trying. “I think the hardest thing with this business is there’s so much cash that goes out,” she says.

“We go to Italy, buy the fabrics. We have to pay for all of that, pay for our trips and then come back and start the sample line and work on production for the previous line.

“So you’re putting out thousands of dollars and you don’t actually get paid until 60 to 90 days after you ship. It’s pretty crazy.”

The sacrifice is worth every pinched penny, she says.

Milaney empathizes with women who wear skirts year-round because they can’t find pants that make them look human. Often the rises are too short, the legs too narrow and the material too cheap.

“I think that’s one of the hardest things to fit for a woman,” she says. “Even with some of the smaller sizes, because of proportions, it’s still a bit of a challenge to find.”

“We’ve spent a lot of time working on our pants,” she says.

Can trousers that finally fit real women kick off a movement?

“I think this is the first step,” Milaney says.

“I think it’s going to take more but I’m really excited about it and I want to be able to continue on this journey and see where it takes us.”